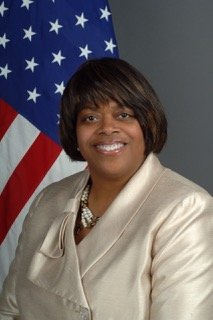 Suzan Johnson Cook was the 3rd U.S. Ambassador at Large for International Religious Freedom for President Obama’s administration and the first female African American and faith leader in this role. As principal advisor to both President Obama and Secretaries, Hillary Clinton and John Kerry advocated and gave voice for religious freedom during foreign policy and national security discussions.  “Sujay” is a native New Yorker, mother of two sons, and is an ordained senior American Baptist Church Pastor of 30 years. She served on the front lines of 911 as the first female NYPD Chaplin. Connect more with her at: AmbassadorSujay.Live  (http://www.ambassadorsujay.live)

Kathleen Cooke: You were at ground zero and the aftermath of 911. Through your efforts and wisdom demonstrated there, you were appointed to work for President Obama as an ambassador for religious affairs. What’s the one thing God has taught you in both those challenging positions?

Suzan Johnson-Cook (Sujay): God has taught me how to be patient. I learned to take the time to really hear what someone else is saying without judgment and without hurrying them. Everyone has a story and needs to share it.

Kathleen: You have accomplished so much in your lifetime. I know the endless hours you must have put in during the aftermath of 911, the long hours and travel you did as an ambassador, and now your ongoing endeavors to empower women of faith. What have you learned about rest?

Sujay: I’ve learned that rest is important for renewal, that recreation really means re-creation. In the Psalms, the word SELAH appears several times. It was an instruction to David, the psalmist, and David, the harpist, to stop singing, stop playing, and just pause/rest/reflect. There comes a time in each of our lives that we must stop, pause, and give God the glory.

I host SELAH BY THE SEA retreats for busy Christian women leaders each year, usually at a beachfront property because so many of the women who serve are inner city, nonprofit leaders, and all of us need a rest. Many of the women who entered the Christian ministry with me almost 4 decades ago, as trailblazing women, are either deceased or very ill. There were no role models to help us, teach us how to stop. It has become my passion and purpose to help our sisters who lead. You can’t get the word RESET without first having the word R-E-S-T.  The extra E comes from the ENERGY you’ll receive when you rest.

I’ve come to really appreciate the Lord’s prayer when God teaches us this line, “Give us this day our DAILY bread,” not a week’s supply nor months, but just as God gave manna from heaven when the children of God were on their journey to the Promised land, there was enough for THAT day. We, too, must do only what our mind, body and soul can handle, and when you’ve done the best you can, STOP, Pause, REST. Take a nap and you will find how important it is for you too.

Kathleen: You were placed in a once in a lifetime unique position when 911 happened. What would you say to someone who often feels different and, perhaps at times odd and out of place, because they are unique?

Sujay:  Our uniqueness just reminds us that we are “fearfully and wonderfully made.” Embrace yourself, embrace all of you. I have been 5’10” since 6th grade. Many would say that height, especially for a girl, was a disadvantage. However, as I played sports all the way through high school (basketball) and then onto college and graduate school, girls were starting to receive Title 9 Scholarships. The boys were beginning to “get their height” as adolescents so being tall became a very positive attribute. I did not walk around with my head hung low. Instead, I learned to stand up, speak up, and look my counterparts, who were mostly male, in the eyes. Entering the Christian ministry as a trailblazer, this confidence and being “comfortable in my own skin,” helped me not enter the ministry with a chip on my shoulder or feel defeated. Rather I was able to smile all the way through. I’m unique, chic, and love every fiber of my being. I love every limb that God blessed me with and now model for other “tall girls” and that the” joy of the Lord” is without question our strength.

Kathleen: You have influenced so many lives over the years. What has God taught you about influencing other’s lives?

Sujay: One of the versions of the prayer of Jabez that I took with me as I traveled as U.S. Ambassador around the world was “Lord, increase my opportunities, let me touch more lives for you, not that I might get the glory, but that YOU will get all of the glory.  I see influence as a way to give GOD more glory.  God opens the doors. He allows certain circumstances to happen so that others will see HIs light shining through me and to glorify HIM. That’s influence.

Kathleen: Sujay, I want to personally congratulate you on winning the Empowering Women Dare to Overcome Grand Prize film award for 2019 for your short film, A Different Way. We were honored to have you in attendance and be able to announce your winning of the award at this past March Influence Women’s Evening in LA. Congratulations!
Watch her winning short on religious freedom here.