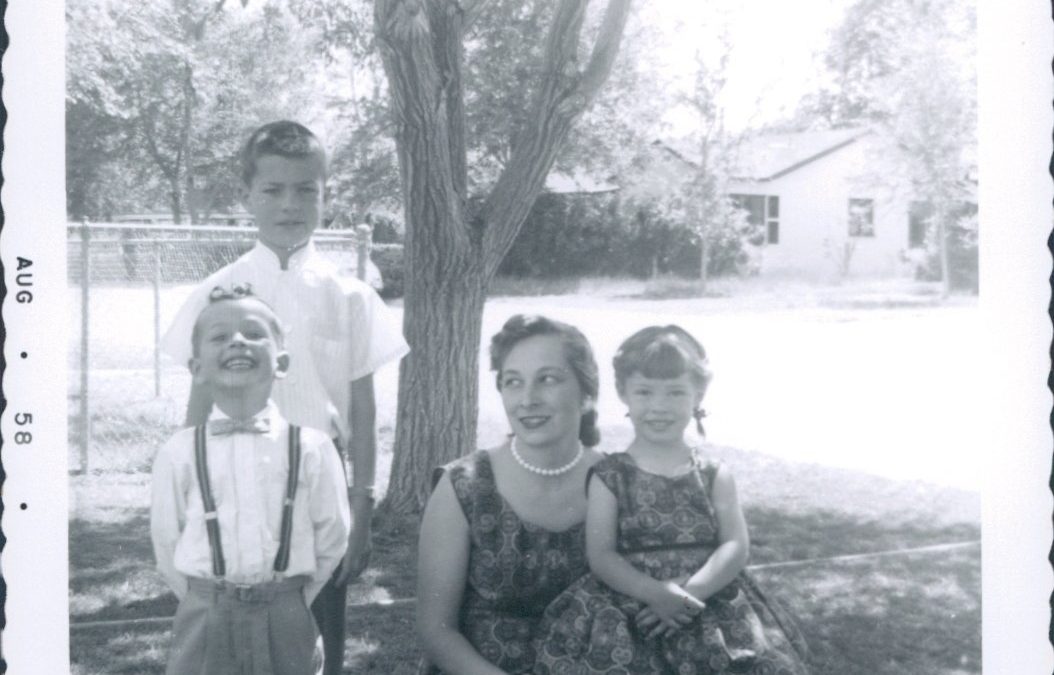 It must have been well over 100 degrees that August day in 1960 as the car lurched and sputtered and dad guided it safely to the side of the desert road. Our family’s bright yellow station wagon had given out and we were several miles from the next town and gas station. My dad got out and soon hitched a ride with a passing truck and I was left in the care of my mother and two older brothers not knowing how long it would be before we saw him again.

My older 11 year old brother, Richard, was out of the car immediately picking up rocks and throwing them at anything he could find for a target. My middle brother, Robbie, lay on the back seat of the car having a hard time breathing. He had been born without a valve in his heart and the doctors had done experimental surgery on him when he was born sewing a pigs valve into his heart hoping he would live.  He was now 6 years old and I began to get pretty worried as uncertainty on lots of levels began to creep into my 5 year old head.

My mom had been raised in the traditions of the Catholic church but it wasn’t until my brother was born and they had moved to Las Vegas that my mom was introduced to a living and vibrant personal relationship to God. She had grown up all her life knowing about her Maker, but now she was in constant communication with Him.  Having a sick child, living in a dry desert town on a month to month paycheck keeps you on your knees.  Her faith and trust in God and the healing and restoration power of God’s promises were unshakable.

The hours began to wear on that day and I began to cry. I knew mom was just as worried as I was about when my dad would return, if that one jug of water would last, and the effect the heat was having on my brother’s health. Her peace that day I will never forget as she held me on her lap, hugged me close, and said, “Kathy, God’s taken us this far, He’s going to take us all the way home.  Just watch and see. “

On this Mother’s Day, I know many women, moms, and grandmothers, are in the midst of facing unfathomable storms, trials, and challenges.  God hasn’t moved,  He is still listening and He will continue to be here to take you through any situation or uncertainty.  His peace, joy and contentment is only a breath away. Rest in it.

We did make it home very late that night.  My brother died a few months later.  My parents are now both with the Father in Heaven and I know some day I will get to rejoin them all – home at last for good.  What joy awaits!

Jesus came that we might have life (right now on earth) abundantly, (not always easy or perfect) but abundant. He’s going to take you all the way Home – watch and see.

Have a fabulous abundant Mother’s Day!

John 10:10  “The thief comes only to steal and kill and destroy: I came that they may have life, and have it abundantly.”