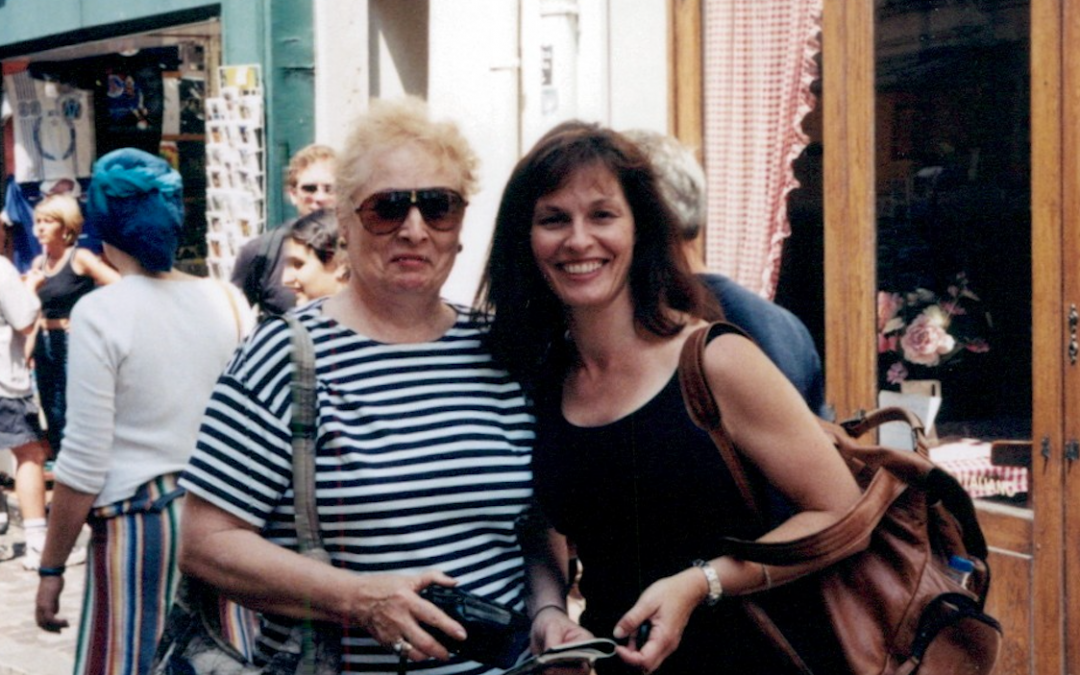 My mother was grieving but didn’t want me to know the depth of her pain. But I did know. My father had died six months previously, and I wanted to give her something to look forward to. She and my dad had always wanted to visit some of their good friends who were running a Christian school’s library in Belgian as missionaries. So, I took her to Europe. We flew to Belgian for a few days to see her friends, then took the train to Bruges and went on to Paris and Germany. It was a 2-week trip of mom/daughter time and lots of beautiful memories and joy.

Germany was our last stop, and mom, who was in her seventies, was having the time of her life but getting tired. The night before we were to leave, we stayed in a quaint German village in a small 6-room alpine hotel. The rooms had a communal toilet in the hall for every two rooms, with a sink and stand-alone shower unit inside each room. It was an arrangement I’d never seen before but seemed fine until it wasn’t. The stand-alone shower unit was raised off the floor by about 2 feet, making it difficult for mom to get into and, in possible, to get out of even with my help, and she ended up falling and twisting her ankle. Needless to say, our return was a bit more challenging than we had planned. When the added challenges of maneuvering through the crowded airport and juggling the luggage came up, we decided just to laugh. We wouldn’t let the incident steal the joy we had had on the trip.

Mom has left this earth and is now in the arms of Jesus, but it’s something I often remember as an example of how life can change in an instant. It’s a story that could have ended our trip with pain and suffering, but we wouldn’t let it steal our joy.

Although I have been blessed with a great husband and father to our two daughters, he traveled lots when they were young for extended periods shooting media productions worldwide. I was often left to deal with challenges alone, many of which happened suddenly and without warning – like major earthquakes and race riots that closed schools and businesses. I got a taste of what it must be like to raise kids alone, and it was tough.

Dealing with those unexpected issues can steal your joy.

How can moms and singles not lose their balance and joy when the unexpected happens?

The culture tells us that to find happiness, we have to find our own truths on what brings us happiness, and most of the time, they tell us we have to find it in ourselves. If we just do certain things and make the right choices, everything will go well. The problem is that the culture promises happiness that is temporary, but God wants us to walk in joy that is eternal.

When the earth loses its connection to the sun, it will spin out of control, and when we lose our connection to God, we will do the same. Jesus is our essential connection point.  The sun’s constant control over the earth keeps it spinning and keeps all the other planets in their perfect orbit. Our creator God once again shows us how it all works. He uses science to give us an understanding of His great power and why He’s in charge. The culture today often wants us to find our truths scientifically, but Jesus said He was The Way and The Truth. Today, the world is losing hope because it is being led to truths that aren’t eternal but based on man’s limited science. God’s truths aren’t limited to science because He works in the unknown and the miraculous. His works don’t always make sense because they are outside scientific realms.

When we find Him in the challenges and those sudden unexpected moments, we make a memory that builds our confidence and grit for when the next challenge comes. We find Life.

When mom lost her balance that night stepping out of the shower it was temporary pain. and it didn’t cause her to lose her balance on what was essential to her and the memory of our joyous trip together. She had lost her husband and life kept causing havoc for her but she had found Jesus years before and that discovery would never leave or forsake her. When challenges and the unexpected happen in life we have a choice too. Joshua says it best, “choose you this day whom you will serve.” Joshua 24:15.

This Mother’s Day, find the joy and choose The Way, The Truth, and The Life.” John 14:6 We once were lost, but now we are truly found because of Jesus.