Others: A Very Merry Un-Christmas Story in July 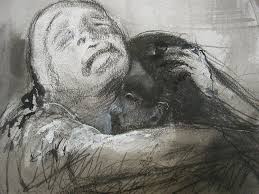 The young pastor didn’t want to go knowing that the men he would be speaking to that night were only there for the meal. He knew although it was free the men knew there would be a price. They would have to listen to his message. But, would they hear it? Would they hear that God forgives everyone every time and that there was a way back? The young pastor had been there many times before with that message of God’s transforming love and forgiveness, but this night he had no idea that it would be him who would have to reach deep into his soul for love and forgiveness.

So the young preacher sighed, grabbed his car keys and went. As he came to the end of his message he stepped off the platform and gave the call. Was there anyone there who wanted to turn their life around? Did anyone want to end their continuous life of suffering? No one came forward. He gave the call again. Did anyone want to be forgiven for something they thought was unforgivable?  Still, no one budged and the only sound was that of rumbling stomachs. So he continued silently to pray hoping that just one person would take the leap of faith and trust that forgiveness could be attained and his life changed.

The discouraged young pastor turned to walk back up to the platform, but his spirit compelled him to turn yet one more time. Is there just one who would be courageous and come? From the very back of the darkened room came a sound of a man slowly rising and the eyes of the room watched as he began to shuffle to the front. When he got halfway up the center aisle he stopped, embarrassed to look up. That’s when he said it.  “I’m your father, and I don’t know how to ask you… but can you… could you forgive me?”

The young pastor froze as the air seemed to have been sucked right out of the room. Standing before him was a man he’d only heard about but who had had an enormous affect on his life. The young pastor was the eldest son of 5 children of a single mom who had worked double shifts as a coffee shop waitress and given her life to provide for her family. The young pastor had grown up with thrift store clothes and handouts, but it was the reliable love of  volunteers and leaders at the Salvation Army that had never let him down. It was why he was there that night.

Each year of the young pastors life an army of love whose focus is on others had been there for him. They’d helped him after school with his homework, taught him to swim and play basketball at summer camp. They were there without fail each Christmas with gifts, turkey dinners, and Christmas carols about a Savior he could count on since he had no earthly father. It was the Salvation Army who picked him up for church each Sunday and who had arranged for him to get his college degree and become a pastor.

Could he forgive this wretched man who now stood before him?

And then a voice deep within him spoke to his silent screaming soul, “to whom much is given much is required.” The years of suffering, grief, pain, and humiliation suddenly evaporated. He couldn’t forgive but Jesus who lived within him could. Jesus had given His life for the forgiveness of sins. Jesus had been born in an animal shelter, forced to be a refugee as a young child,  been raised in poverty and roamed the lands as an adult never knowing where he’d sleep or eat. Then, He was unjustly accused, brutally beaten and hung on a cross for sins he never committed. But He gave his life willingly because it was required. The young pastor knew forgiveness was being required of him.

The young pastor lifted his head toward Heaven and cried out, “Oh Father, forgive me. I am a sinner and you died for us all so that all can be forgiven.” He reached out and embraced his earthly father as tears flowed.

One often hears the bells rung at Christmas by volunteers at red kettles for those in need. But the need isn’t just at Christmas and the bells aren’t just to get our attention to donate. It rings for those who need life throughout the year. They need forgiveness. When the Christmas bells have been put away can we still hear the bells ringing on non-Christmas days? Can you hear them now urging us all to give? Forgiveness for injustices? Forgiveness of people we don’t want to forgive because they have hurt us so deeply? Will we? Will we call to those around us throughout the year, “does anyone need forgiveness as the young pastor did?

Every day it’s a very merry un-Christmas Day – its’ a day of forgiving because it’s about giving to others. When you have been forgiven you are required to forgive and when you have been entrusted you will be asked. Read Luke 12:48.

John 15:11 puts it this way: “I have told you this so that my joy may be in you and that your joy may be complete.”