Smartphone Addiction is a Bigger Problem Than You Think 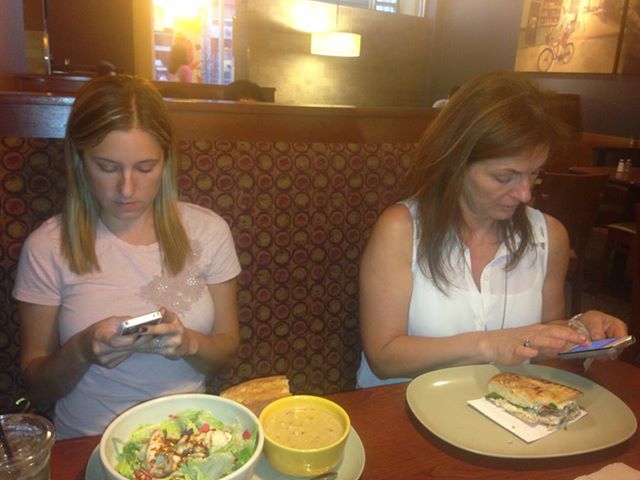 The woman on the phone told me, “I get panic attacks when I don’t have it.” She wasn’t talking about food, alcohol, or medication, but her smartphone.  Recently, my husband snapped a picture of my daughter and me at dinner when we hadn’t seen each other all week. Our food had come to the table and we weren’t chatting with each other or even eating our food, we were sitting right next to each other texting. So I take the plank out of my own eye and admit I am as guilty as anyone.

We are all caught up in our digital devices.

Deaths and accidents due to cell phone use are escalating. Not only while driving, but just walking. We’re walking off subway platforms, falling off cliffs, and even walking into parked cars because we’re so focused on our phones. Some cities have begun installing padded telephone poles on sidewalks and have not only outlawed texting and driving but texting and walking. Tragically last year in New York, a nine-year-old girl hung herself when her mom took her phone and told her to go back to bed. The daughter couldn’t deal with being disconnected from her friends.

Social media, YouTube, video games, and other addictive platforms are our drug of choice these days. As a consultant for our media company, Cooke Media Group, I study how media is being consumed. More recently, I have been asked to speak on the subject to educate audiences on how to use wisdom rather than fall victim to the distracted world we live in.

This past year over dinner, I had a conversation with Nona Jones who oversees Faith-Based Partnerships for Facebook and also pastors a church alongside her husband. She works and mingles with top media executives, web designers and platform creators in Silicon Valley as well as understands the need for kids to have the influence of God in their lives. She said, “My husband and I constantly monitor our kid’s screen time in our home and keep it to a minimum.”

Here’s some thoughts and suggestions on how to control smartphone addiction and use wisdom within a media controlled world.

Keep screen time on all devices, including the TV, to no more than 90 minutes per day.

This doesn’t include usage for educational or research purposes. Through brain mapping, Neurologists are showing how kid’s brains are actually growing differently than previous generations. Research also reveals that we check our phones about 150 times daily and that Middle School kids check their phones about 85 times daily, even though they aren’t supposed to be using them during school hours.

How can you limit that time?

Get them reading a real book, journal, or newspaper and encourage them to write. Be the instigator of questions that get them to think about issues that surround their lives. Encourage them artistically and critically. Enroll them in music lessons. Find out what they’re passionate about and then get involved with them. If it’s video games, then play with them and monitor their time and what they are playing. Yes, you will have some pushback on getting them to put their phones aside but stick to it. One of the best conversation times I had with my girls when they were young was in the car driving to various dancing, sports, and music lessons.

Pick up the phone and actually talk to someone.

Researchers tell us we only make an average of 6 phone calls a month on our phones. Instead, we usually choose to text or email. The United Kingdom hired a Cabinet level “Minister of Loneliness” in 2018 to deal with the many people who are disconnected and lonely. When you actually talk to someone on the phone, you greet them and engage in conversation, taking time to chat about each other’s lives outside of just giving instructions or receiving information. You extend human warmth, caring and friendship. Emojis in text messages just won’t communicate that real human emotion. There is something about hearing a human voice that connects us in deeper more meaningful ways.

When it’s time to eat, turn your phone on vibrate and ban them from the room. I know of some families who have designated baskets outside the dining room or the kitchen where phones are placed because they are just too much of a temptation. It’s a good rule for business meetings too. If some kind of emergency is transpiring at that moment, make sure you let the other person know that you are expecting an important or urgent call or text. Learning good phone etiquette is essential in today’s world but I have found how few people respect it.

Finally, just say no yourself.

Remember your kids and grandkids are watching and learning from your habits. When you are with them, be with them. When you choose your phone over them it signals that others are more important than they are. If you have to be on the phone, let your kids know it will be only for a few minutes – and then make it just a few minutes. When you are waiting in line at the store or at events, talk to your kids. It’s not the time to check your social media or play a video game. Even when you are by yourself, take the opportunity to engage with people around you. Pay attention and become that exceptional person who shares a bit of human kindness, and the love of God to the many who are increasingly lonely. As Christians, God calls us to care for others not addicted to media.

Jesus taught in Luke 8:7-9 about distractions that choke us, “’ Other seed fell where there was nothing but weeds. It too was unable to grow to full maturity, for it was choked out by the weeds. Yet some of the seed fell into good, fertile soil, and it grew and flourished until it produced more than a hundredfold harvest, a bumper crop.’ Then Jesus added, shouting out to all who would hear, ‘Listen with your heart and you will understand!’