The Long Haul: Are You Up For It? 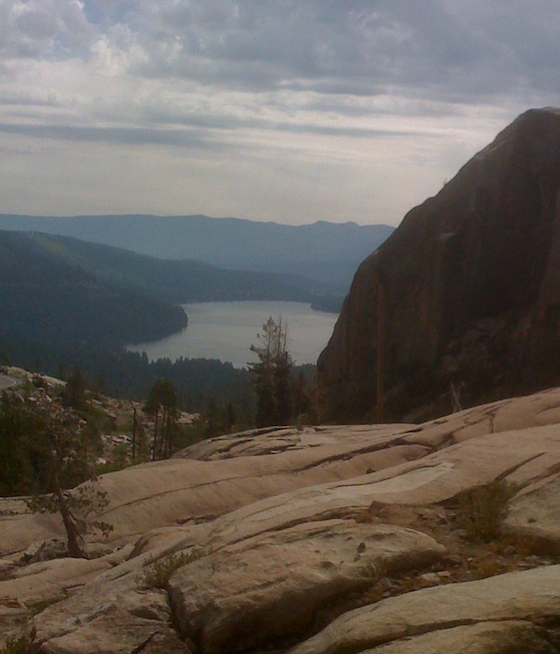 As a child my dad ran the north beach at Donner Lake, California. You may have heard or read about the historic true story of the pioneers who got stuck at the base of the high Sierra Mountains (often compared to the Swiss alps) and ended up having to eat their dead to survive the winter because they couldn’t get over the summit. I born and lived on the lake at the base of those mountains every summer for most of my childhood.

Donner Pass cuts through those rugged mountains  – now called Interstate 80, but back then there wasn’t an interstate only a two-lane nine-mile perilous winding highway. And there were few guardrails so many people plummeted to their deaths traveling the steep road. I grew up watching the big trucks prepare to go over the mountains because the truckers knew that if they weren’t prepared – checking their brakes, water, oil and tires properly there was a good chance they wouldn’t make it.

Even then, with all their rigs properly fixed there was always the unknown. Perhaps it would be a part of the engine that would give out or a car that would suddenly breakdown or stall in the middle of the road and the truck wouldn’t be able to stop in time when it came barreling around one of the blind curves.

It was a life lesson for me as a child to observe and learn from even today, that even when you make the best of plans and take all the precautions, life still happens. But, I also learned that it happens a lot less when ready for the long haul.

Here’s three things to think about that might help get you over the mountain and reach your summit:

Start with the right kind of goals.

Write specific measurable ones. The truckers knew they had nine miles to go to get to the top of the summit. They knew where the 1st mile stone was and where they could pull off if they got stuck. They had mapped it out. Have you mapped out your goals? Do you know where to take a break and where you can get support when you get stuck?

The truckers also had tools to measure their trucks capabilities – oil dipsticks, and tire pressure and car engine gages. But most importantly, they knew that their loads had to be weighed and balanced before their journey even began. If they were too heavy or weren’t perfectly set their load might shift and that could mean certain death and a tumble over the edge.

Check in with your goals often. Are they reasonable, measurable and thought through? Do they need to be adjusted for overload and balance? Or are you just jumping on what sounds like a great idea or trend without any research, direction or plans? Remember that great goals should never be written as destinations but written to be reached and moved past.

Move past the past and go for the future.

Stop living in the past.  What you achieved was great in high school and college but in Hollywood, where I work, the only thing that matters is if you can bring in the load today. Have experienced failure? Join the club. We all have. The truckers who took on the journey and may have broken down one time learned how to not let it happen again. They learned how to keep moving. Mistakes happen but God’s called us to keep moving forward.

Stop thinking that failure means you’re inadequate or not good enough. Failure is part of the learning process and the road is never straight up the mountain there are always lots of curves. It’s your attitude that matters and it’s knowing that you are following God’s leading and not your personal agenda and selfish choices. God said to take Him with you. So don’t leave Him on the side of the road thumbing a ride. You’re going to be to see how He is going to be your on-road mechanic.

Remind yourself why you were so passionate and motivated to attempt the journey in the first place. As an actress in Hollywood for many years and now a producer and media consultant for Cooke Media Group, this is the first thing an actor must research when examining a character for a role. It’s called the “intention.”  What do you want from the other person you’re in the scene with at that moment and in the entire production? And the best intentions are the best . They’re the ones connected to the character’s strongest passion.

One of the questions I ask young actors and hopeful writers, producers, and directors coming to Hollywood is why have you come? Was it to prove to your parents and friends that you’re good enough? Was it to prove to yourself that you are the greatest star that ever lived – the one your mother said you were? Or was it because of that all illusive dollar beckoning you? Film composer, Jim Covell, says, “If you come to be an artist Hollywood won’t stop you. But if you come to be a celebrity Hollywood will kill you.”

Still lost on the answer to that difficult question of passion? Maybe it’s not what you love the most but what you hate the most that you should think about. Bishop T. D. Jakes says, “ Your misery is your mission.” Maybe God’s called you to fix – solve the problem that’s not only driving you off the mountain road but it’s sending lots of others over the edge as well. Find the right  let it drive you.

Finally… Deal with the fear.

Don’t internalize your fears but courageously identify them. Reaching the summit is not the end of the journey it’s just the beginning. Fear is the fog that drifts in sometimes. Learn to drive in it because it’s inevitable.  Know the One who brings the penetrating light to help guide you through it.

Getting to the top of the mountain has it’s challenges but heading downhill can be even more perilous. Most celebs have more issues once they have reached stardom than they ever had climbing up the mountain. When you lose your brakes you can lose your life. So don’t try and go it alone without preparation and if there is only one thing you can never leave behind and will prepare you for all those unseen issues it’s your repair manual- the Bible. Don’t leave home without it.

Then get in the truck and keep moving forward knowing God will be there with and for you for the long haul.

“Trust in God with all your heart and lean not on your own ways but acknowledge Him – run from evil and He will make your paths straight. “ Proverbs. 3:5-6.